This Gold Pilsner label pays homage to the working dog warriors of past, present, and future. From fighting on the front lines, to performing their duties as service dogs, these heroes deserve a biscuit on us!

This Amber Ale celebrates the first soldiers to train in Petawawa, Ontario, the artillery and their infamous gun. Known as the king of battle, the artillery has played a key role in the defence of this Nation!

Known for their ability to construct and destroy, the beaver is the symbol of the Royal Canadian Engineers. As the senior Regular Force engineering regiment in Canada, 2 Combat Engineer Regiment can trace its Petawawa routes to the 1930s.

Audax et celer, latin for swift and bold is the motto of the Royal Canadian Dragoons. They are Canada’s senior regular force armoured regiment and their history derives from a proud cavalry past. Established in 1883 as a cavalry unit, the Regiment has fought in every major conflict since.

Our Inspiration Behind War Dog

Dogs have been a soldier’s best friend since the Ancient Egyptians began using them. With the release of our first label, War Dog, we are proud to be able to pay homage to these Canadian Warriors and to tell the story of a couple who have inspired us.

During the Second World War, the 1st Battalion of the Royal Rifles of Canada was gifted with their mascot named Pal. Pal was a Newfoundland dog who was donated by his family to avoid being put down. Renamed to Gander, he was quickly welcomed into his new pack and was promoted to the rank of Sergeant (Sgt). In late 1941, Sgt Gander was deployed with his Battalion to Hong Kong as the Battalion mascot but soon found himself in the thick of the fighting. 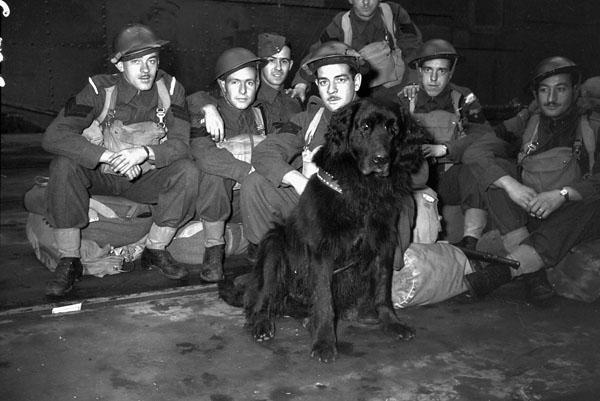 During the Battle of Hong Kong, Sgt Gander earned the nickname “Black Beast” from the Japanese soldiers. This was in appreciation of Sgt Gander fighting Japanese soldiers in the middle of the night. His black fur made him virtually invisible to the naked eye and his aggressive bark and willingness to maul his enemies, caused the Japanese to believe that the Canadian's were training war beasts.

On the night of the 19th December 1941, the Battle of Lye Mun began. When a Japanese grenade was thrown at a section of Canadian soldiers, Sgt Gander picked up the grenade and ran away with it. The explosion killed him but his actions saved the lives of seven Canadian infanteers. It is for these actions that Sgt Gander was posthumously awarded the Dickin Medal for Gallantry (the Victoria Cross for service animals) in 2000 and is remembered to this day.

A war dog does not always need to be in the heat of battle to perform its duty. Maximus is a 7 year old Siberian Husky service dog from Petawawa, ON and an absolute inspiration for us. His owner, Jill McLellan, retired from the Canadian Armed Forces as a Captain (Capt) shortly after being diagnosed with Post Traumatic Stress Disorder (PTSD). It was at this point when Maximus became the gladiator he is today. Before even being trained, he knew what had to be done. 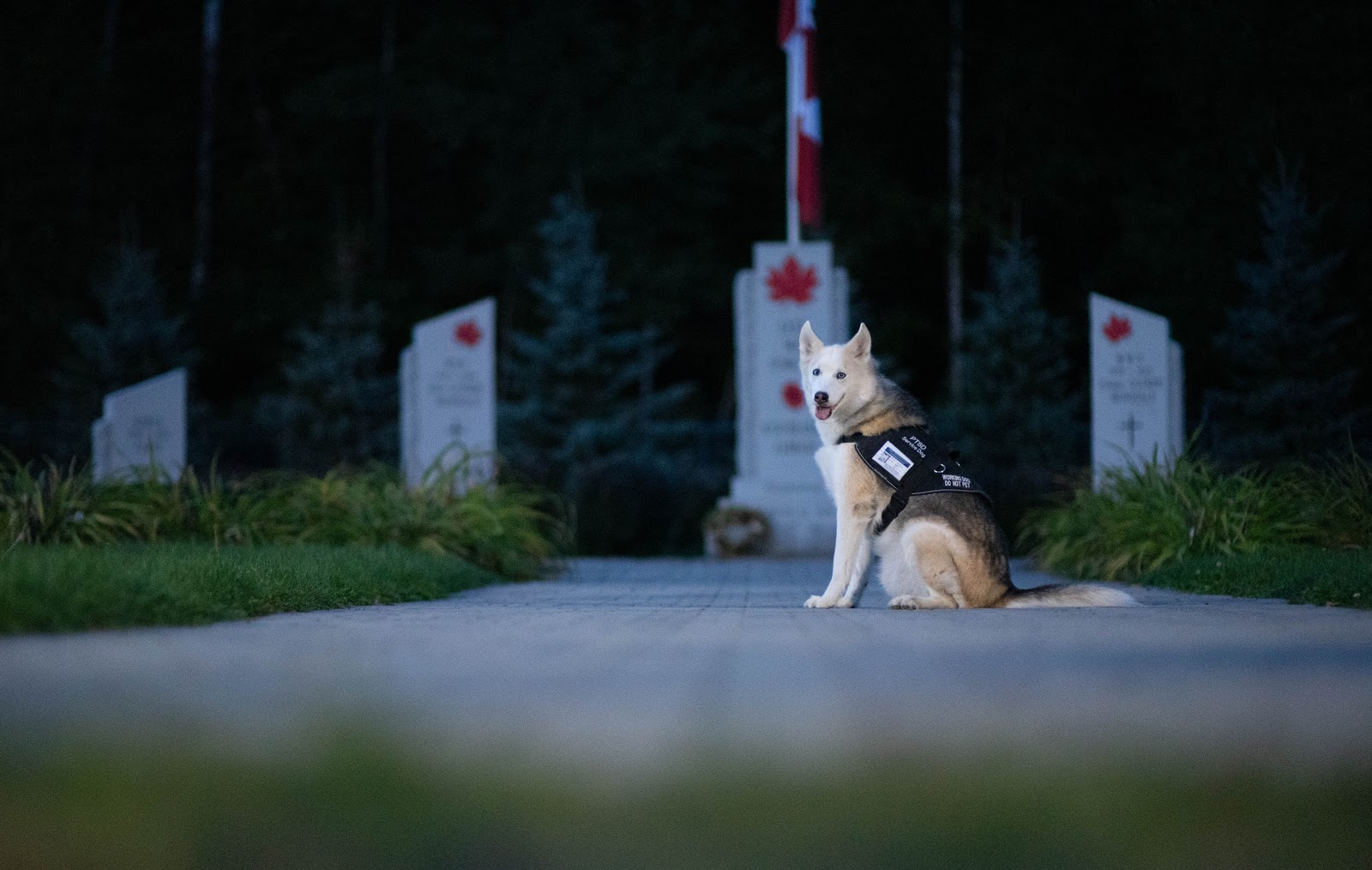 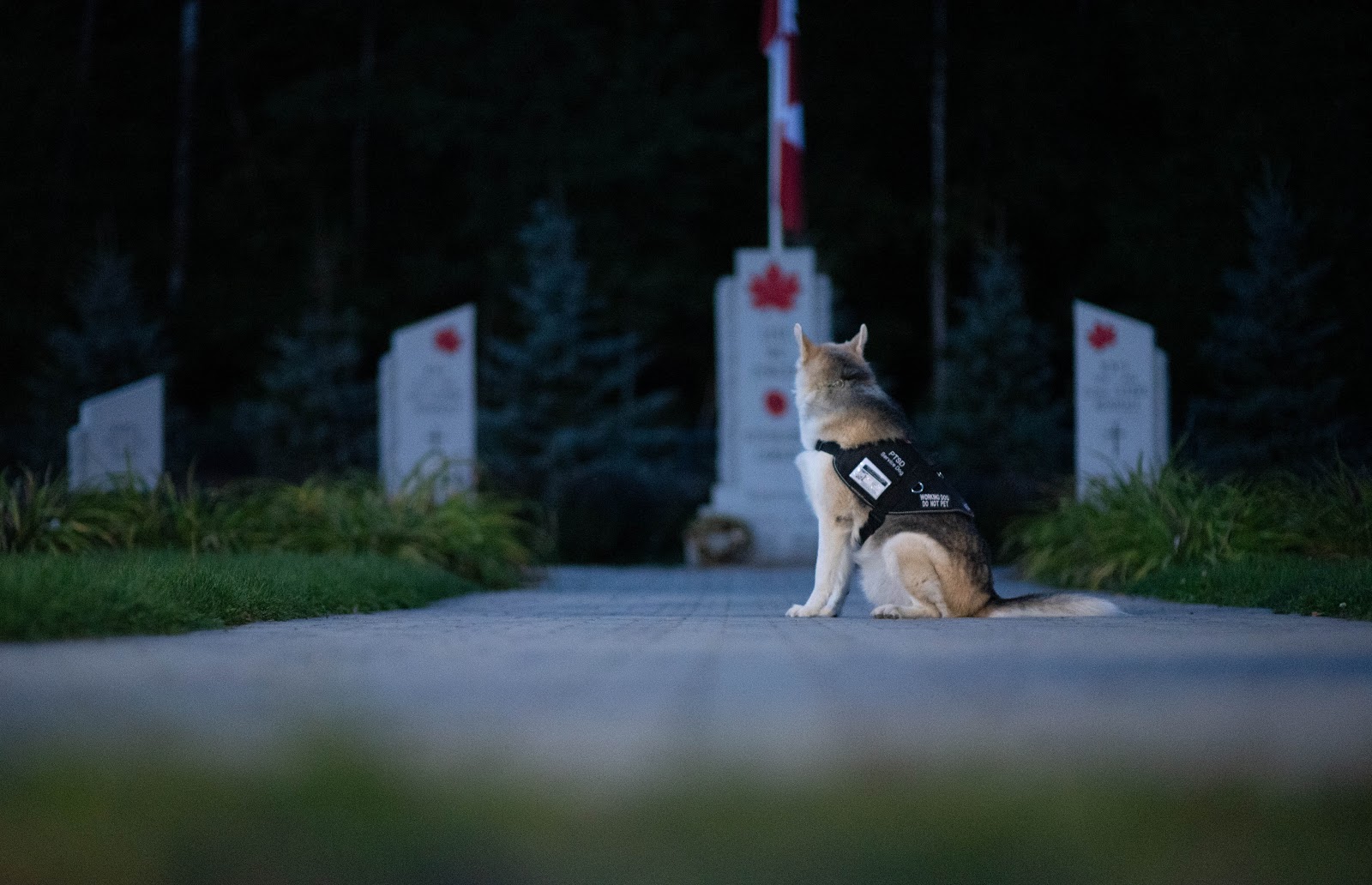 Figure 3: Maximus honouring his fellow soldiers at the memorial near the Petawawa Royal Canadian Legion.

Maximus honours and demonstrates what it means to be a hero. He provides Jill with the comfort and support she needs to get through each day. Incredibly, he is able to recognize and remove Capt (ret’d) McLellan from stressful situations but also gives her the space to be able to challenge herself. He is always close by and even when the vest comes off, he refuses to step away from his duty. His gentle nature and love of life lightens up every room he enters and it can be said that he is everyone's best friend. Perhaps most importantly, Maximus has given Jill the confidence and passion to help others with PTSD. Together, they have joined the ranks of Watch My 6 Service Dogs and train the next generation of PTSD service dogs. None of this would have been possible without the courage, loyalty, and dedication of Maximus. A true Canadian hero and war dog.

At Dog House Brewing Company, we salute warriors like Sgt Gander and Maximus for their sacrifices and service to our Nation. There are many more heroes like them across our great country and we are extremely proud to be able to honour them all with our pilsner, War Dog!

Our Inspiration Behind 18 Pounder

In order to honour Garrison Petawawa’s treasured past; we must pay homage to the Royal Canadian Artillery and to one of the most infamous guns ever used, the 18-pounder.

The 18-pounder gun has a deep history and was first brought into service in 1903. In 1905, The Royal Canadian Horse and Garrison Artillery traveled from Kingston to become the first units to train in Petawawa. The 18 pounder was so popular that it became the symbol of Canadian artillery during the First World War, firing in every major battle including Vimy Ridge. Post war, a few 18-pounders remained in Petawawa to be used for training but found minimal service in World War 2.

Post Second World War, training continued in Petawawa, but there was still no official Regiment. That all changed with the outbreak of the Korean War. In order to fulfill the wartime requirement, the 2nd Regiment, Royal Canadian Horse Artillery (2RCHA) was formed and took up permanent residence in Petawawa. Since then, they have contributed in every major operation. This includes Korea, Bosnia, and most recently Afghanistan.

The importance of Gunners cannot be stressed enough. From the First World War to today, Canadian artillery has been one of the leading influencers on the battlefield. Their expertise and professionalism has kept this great Nation safe and we at Dog House Brewing Company are honoured to be able to pay homage to them!

Our Inspiration Behind Breacher

Known as Sappers, the Corps of Royal Canadian Engineers has a long and proud history in Garrison Petawawa. First arriving in 1906, a year after the Artillery began training in Petawawa, the engineers constructed the huts, stables, and utilities necessary for soldiers to live and train.

It wasn’t until 1931 however that they had a permanent unit, 1st Field Company Royal Canadian Engineers. Renowned for their bravery in battle and courage in the face of the enemy, this unit has proudly supported their infantry and armoured counter-parts in every major conflict since the Second World War. Their tasks range from domestic relief during times of crisis to enabling friendly forces the ability to live, move, and fight on the battlefield. Now known as 2 Combat Engineer Regiment, they remain to be the senior Regular Force engineering unit in Canada.

The beaver is the symbol of the engineers as it perfectly represents their versatility, adaptability, perseverance, and skill in building and demolition. We are honoured to pay homage to the engineers and have a beer named after one of their most famous tasks, breaching.

Our Inspiration Behind Royals

When most people think about the army, they think of the infantry.

Garrison Petawawa is home to two Battalions of the Senior Regular Force Infantry regiment, the 1st and 3rd Battalions of the Royal Canadian Regiment (RCR). Being able to trace its roots as far back as the War of 1812 but being officially formed in 1883, Battalions from the Regiment began training in Petawawa alongside the Engineers, Armoured, and Artillery in 1907.

1st Battalion RCR moved to Petawawa in 1948 and is now a mechanized infantry battalion while the 3rd Battalion RCR conducted this move in 1996 and fulfills the Regiment’s light infantry roles. Both maintain the many Battle Honours of the Regiment including but not limited to the Battle of Vimy Ridge (First World War), the Landing of Sicily (Second World War), and the Korean War. They most recently fought in Afghanistan but have also served as peacekeepers and in non kinetic roles throughout their history. Finally, as proud members of the community they continue to serve domestically, aiding locals during times of crisis such as the Spring floods of 2019.

For their dedication to our Nation and community we are honoured to be able to pay homage to the brave men and women of the Royal Canadian Regiment.

Our Inspiration Behind Springbok

Established in 1883 as a cavalry regiment, the RCD derived the bounding springbok cap badge during the Boer War (1900 - 1901) when a herd of grazing springbok suddenly became startled. This alerted the Dragoons of an impending Boer attack which they were able to repel. The RCD have also been part of every major conflict in Canadian history including both world wars, the war in Afghanistan, and most recently in Iraq. They have also supported peace operations in Egypt, Cyprus, Somalia, and the Balkan’s between 1950 to the early 2000s and have served domestically during times of emergency.

As part of 2 Canadian Mechanised Brigade Group, the Regiment has called Petawawa home since 1948 and earned the freedom of Petawawa in 2019. For their actions in battle and commitment to community, we are proud to pay homage to the Royal Canadian Dragoons.

This website uses cookies. By continuing to use this site, you accept our use of cookies. Declining unfortunately will limit the use of the shopping cart.